ANTAM's nickel ore deposits are generally not very deep. Limonite nickel ore layer is above the saprolite layer. This makes limonite mining cheaper and limonite mining is complete before saprolite. Nickel ore is mined using the selective open pit mining method with backhoe equipment for excavation and trucks for transportation. No drilling or blasting is required in nickel ore mining or any complicated processing, other than drying and screening ore. In the ore screening process, large ore is obtained which requires additional processing to crush the nickel ore rock to the desired size.

ANTAM conducts open pit mining method with a selective mining to produce high grade and low grade nickel ore. Nickel ore is used for ore feed for Kolaka ferronickel plant as well as being sold to domestic market. ANTAM sun dries its mined nickel ore before being screened to be crushed into desired size. Ore is transported using belt conveyor to the stockpile area before the end of being used in ferronickel processing or transported to domestic customers. 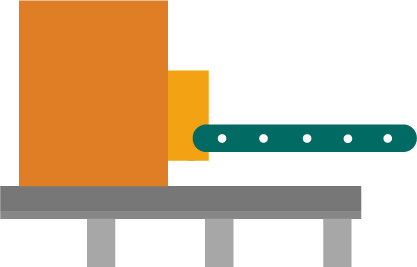 One of ANTAM’s core strategies is to move downstream to produce higher added value processed products. The processed product currently produced by ANTAM in its nickel business line is ferronickel, which contains about 80% iron and 20% nickel. ANTAM’s ferronickel, which is differentiated as containing high or low carbon levels, is sold in the form of shots (pellets) to stainless steel producers. Other products manufactured by ANTAM